It also spreads from one computer to another. Once a virus has infected the host computer. It can infect other system resources, software, modify or disable core functions or applications. As well as copy, delete or encrypt data. A virus can spread through opening an email attachment or links, clicking on an unknown executable file, attaching an infected USB drive to the computer. The term Virus commonly used to refer to other types of Malware. Which include computer worms, ransomware, spyware, adware, Trojan horses, keyloggers, rootkits, bootkits, Browser Helper Object and other malicious software.

How does Computer Virus Function?

A computer virus will lie dormant until the circumstances cause the computer to execute its code. In order for a virus to infect your computer. You have to run the infected program which results in the virus code execution. 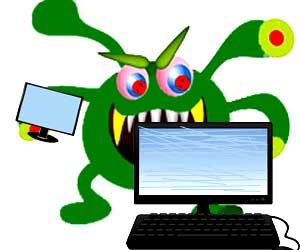 This means that a computer virus does not do anything unless you run it. However, once it starts, it slowly spreads itself to the entire computer and also infects other computers on the same network.

Most common consequences once the virus has successfully spread itself includes stealing passwords or data, logging keystrokes, corrupting files and folders, sending spam emails to the contacts in your email and even ransomware in which the virus locks down the entire computer.

The computer virus can infect both Windows and Mac computers. Even the smartphones get infected by downloading some unknown application.

Most common symptoms of getting a virus on the computer include the slow performance of the computer, browser redirection, unable to open particular files and folders on the computer and automatically sending emails to the contacts in your emails having some embedded links and attachments.

Reasons for getting a virus on the computer:

Usually, a software designed with some security features to prevent unauthorized use of system resources but sometimes a software may have bugs which result in spreading the virus and infecting the computer. To avoid this, the software updated regularly by downloading the latest patches from the manufacturer’s website.

Another main reason for getting a computer virus is because of neglecting the computer security. To avoid getting a virus on the computer one should always have an antivirus program installed on their system.

The Vulnerability of Operating Systems:

This should be the first and most important step needs to be taken to avoid and to remove viruses from the computer. There are various different antivirus brands available on the market to choose from.

Most software these days have an inbuilt scheduler that helps the software to scan the computer automatically at a set date and time.

One should always back up the data including pictures, videos, documents, etc on an external hard drive from time to time. Similarly, windows recovery disc would help you to recover the system back to its factory settings. Alternatively, creating system restore points will ensure that if something happens to the computer. You always will have an option to restore it back to a previous date.

Running obsolete software and not updating the operating system regularly will make the conditions just favorable for viruses to attack your computer. If you are running a Windows operating system. Make sure to run the updates regularly and also the software that you should use the latest version.

Sometimes even with the best security system installed. Your computer will still get infected. This is because the viruses are made first and their cure comes out later. Also, there are so many new viruses being generated by the people out there which makes it difficult sometimes for your security software to catch it. So, in that case, you just need to be careful while working on computers. For instance, you might get an email from an unknown sender with a strange attachment.

Never open such emails and delete them permanently from your system. Similarly, clicking on some strange looking files for ex: “picture.jpeg.exe”. Now the nature of this file is executable. But it is being camouflaged as some kind of an image file. Another example is of browser extensions some of which does not require and are responsible for the slow performance of the browser. Optimize your browser regularly to avoid such circumstances.